Trikonasana at Roatan Bed and Breakfast.

I set the alarm for 5am. The sunrise is quiet, calming, and stunning. I find my breath and breathe deeply, filling up my body as if it were a balloon. Each inhale and exhale syncs with my pose. Dawn spreads and I am showered in morning rays; red, orange, and purple hues. My practice feels light; lately it’s been monotonous. I know I’ve hit a plateau. I can’t seem to get over it. But, something about this morning created the opportunity to make and use the space within my body. A shift in my perspective? A unique calm brought on by this place or maybe the fact that I needed a vacation. I’m right where I need to be. It’s a lesson I teach and a lesson I learn over and over. 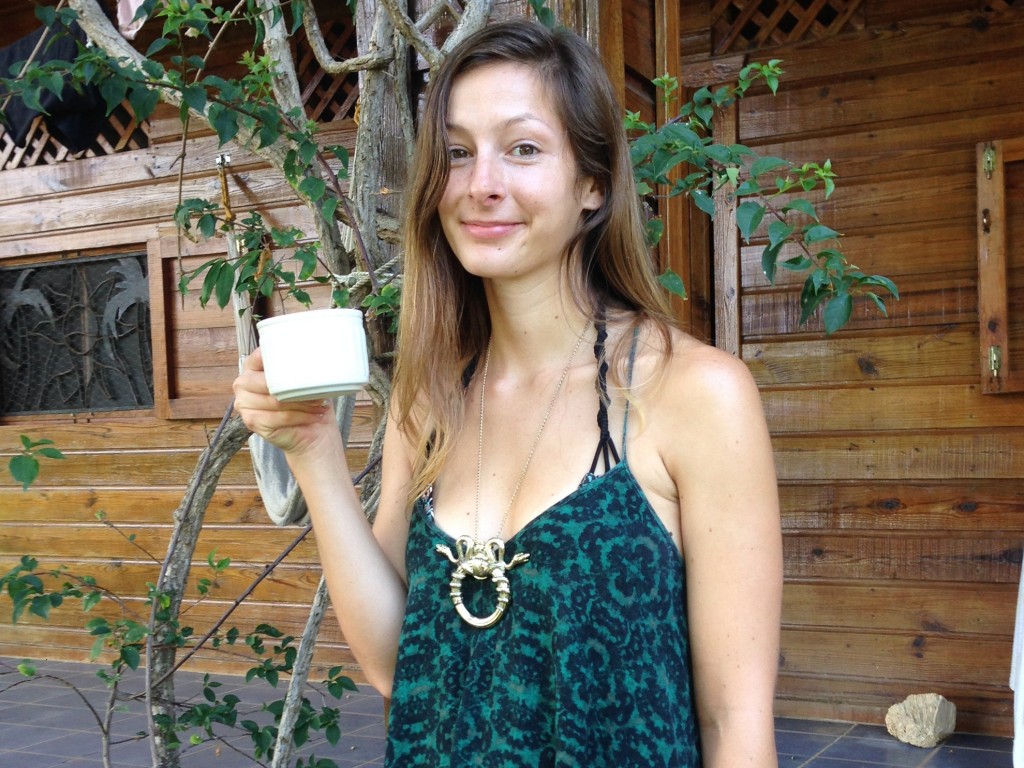 The ladies are awake when I get back and there is coffee! The room fills with our chatter and laughter as we get ready for the day. There is so much excitement for our adventure to the Little French Keys. They have an animal sanctuary, paddleboards, and a bar that hangs out over the ocean. It’s a glorious trifecta of fun. We can’t wait to get there! 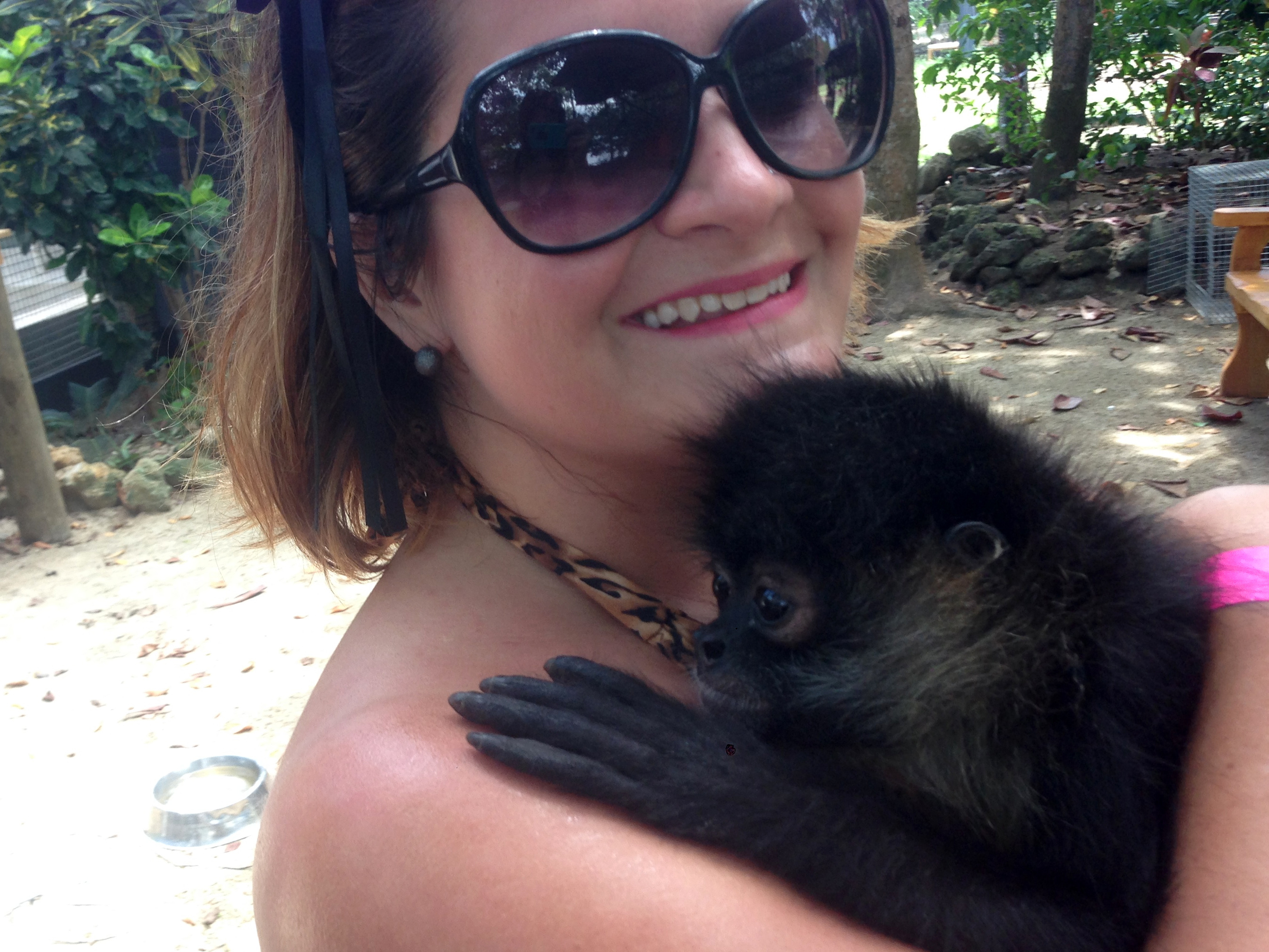 We walked in and were directed to the sanctuary. It felt like it was a zoo to me. I approached a man who was cleaning a cage and began to question him on the intention of the establishment and the condition of the animals. He looked surprised and began to walk us through the “zoo” teaching us about the animals and giving us their history.

The first animal we met was a howler monkey. She loved to be cuddled despite her early years. When she was a baby the former owner killed her mother and then broke the baby howler monkey’s legs in a fit of rage. The howler monkey could only use her arms to get from place to place. The care taker describes the incident with disgust; the owner was never charged for killing the mother or harming the baby.

“You can buy a monkey, any monkey, for as little as $400-$800 here and do whatever you want with them. No one says anything. Many times they are sold to the circus or killed. It’s very bad, so we try to find and take as many as we can.” 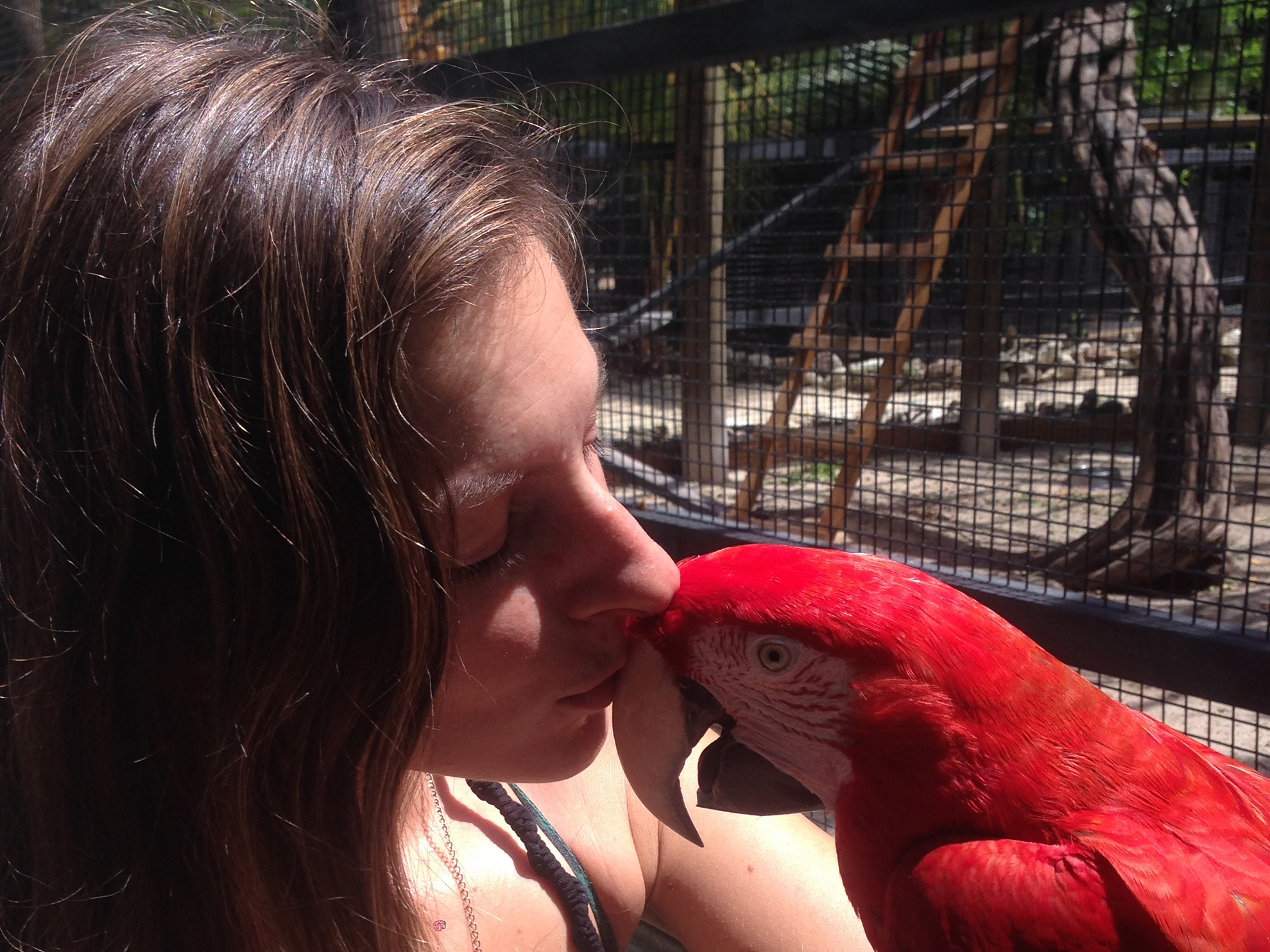 There were a group of parrots in a large cage eyeing us curiously. The care taker handed one to me. I nearly dropped her! She was much heavier than I anticipated. Her eyes worked their way up my face and around my hair.

“Go ahead, give her a kiss. But don’t get scared or she might bite you.”

Not the best way to encourage me to put my mouth next to her sharp beak! Ha! But, I trusted the parrot and did it anyway. She seemed to enjoy my slightly nervous kisses and did not bite me. When she started to weigh me down, I passed her on to my friends. 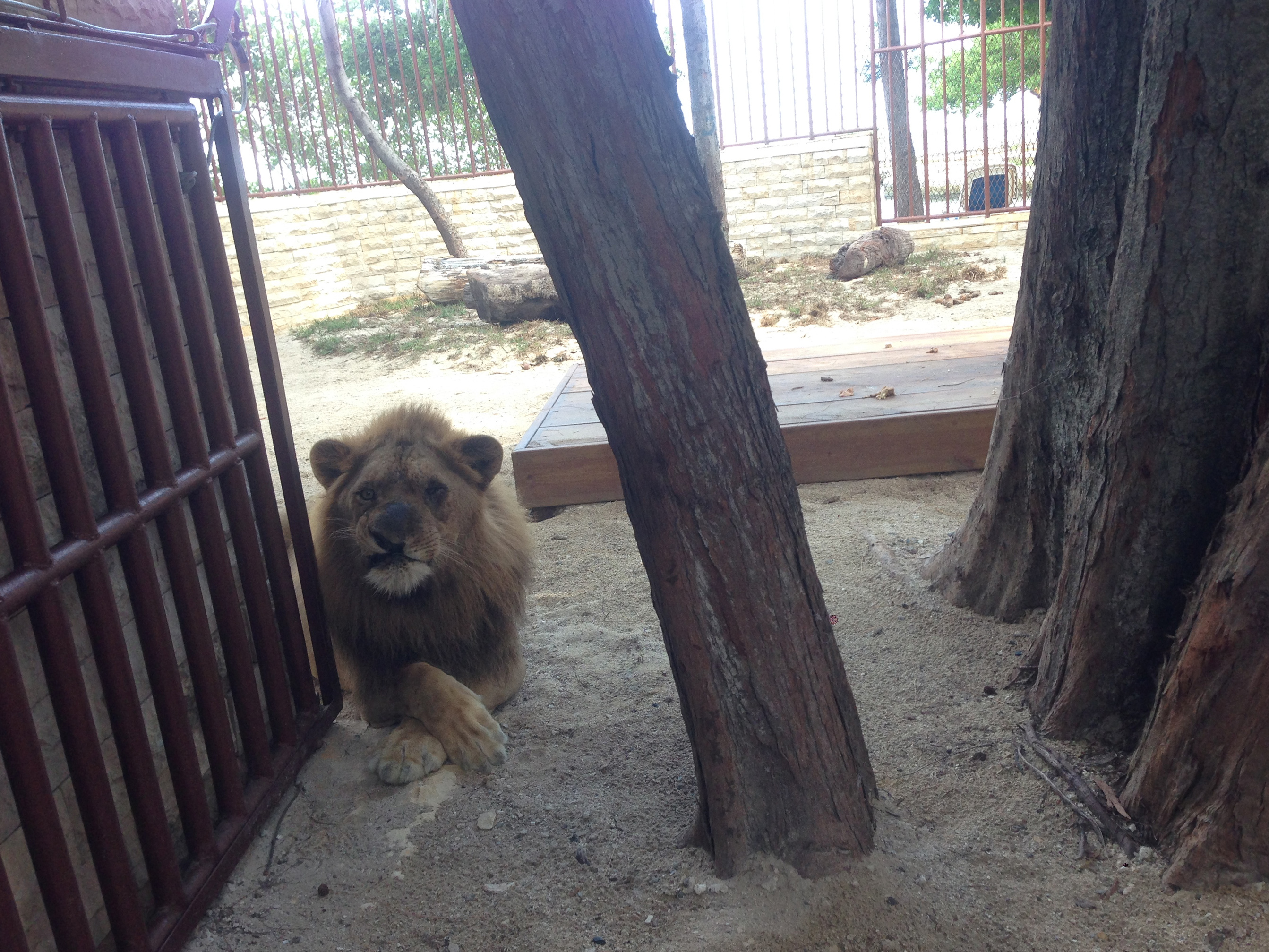 Leo the Lion (no edits made to photo).

Next, we were taken to meet Leo, the lion. Leo was rescued from the circus. He has a cleft lip and looks a little rough. When the owners of the Little French Keys rescued him, he weighed about a 100 lbs (a healthy lion weighs around 350-450 lbs). Apparently, the circus was feeding him ONE chicken a day. We fell for him immediately and my friend stuck her fingers through the cage, which he suckled on like a baby kitten until he was bored and retired to his napping spot.

“This used to be Simba’s cage. When we got Leo, the breeze took his scent right up to Simba and Simba didn’t like that at all. So, we had to switch.  Now, we’re building him a brand new cage.” 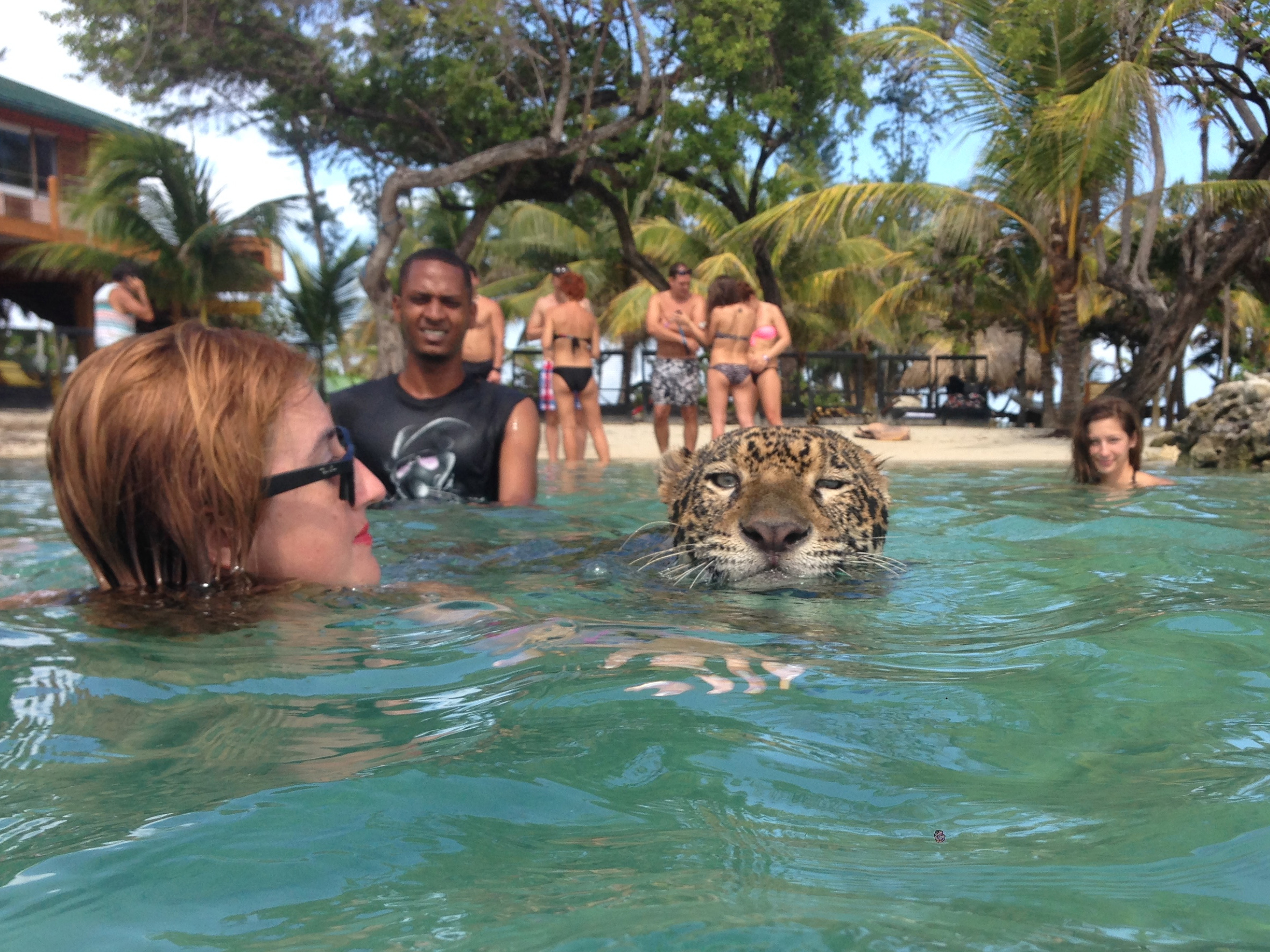 Simba is the jaguar. We walked over to the new cage which overlooked the ocean and had a fountain. His cage was one of the nicest I’ve seen. My friend even joked that it was better than her Brooklyn apartment. I was starting to change my mind about the zoo-like quality of the place. Their hearts were in the right place and they seemed to be doing all that they could to provide a happy life for these rescued animals.

Simba was playful and adored the caretaker.

“I’ve been with him since he was a baby. He was so small when they brought him home from the circus. I work with him everyday. I am like his mother.”

Simba liked to go for swims in the ocean and we were allowed to join him.  He was content paddling around with his big, dopey paws and when we got too clingy he would swim in the other direction. I fell in love with him instantly while maintaining a healthy sense of awe. I had to remind myself that he was a jaguar and not a big house cat. I watched as he moved through the clear, turquoise water with the intense focus of powerful animal. I could have swam by his side for the rest of the afternoon. But, our time ended and we said our goodbyes.  As we walked away it was hard not to feel one with the universe. 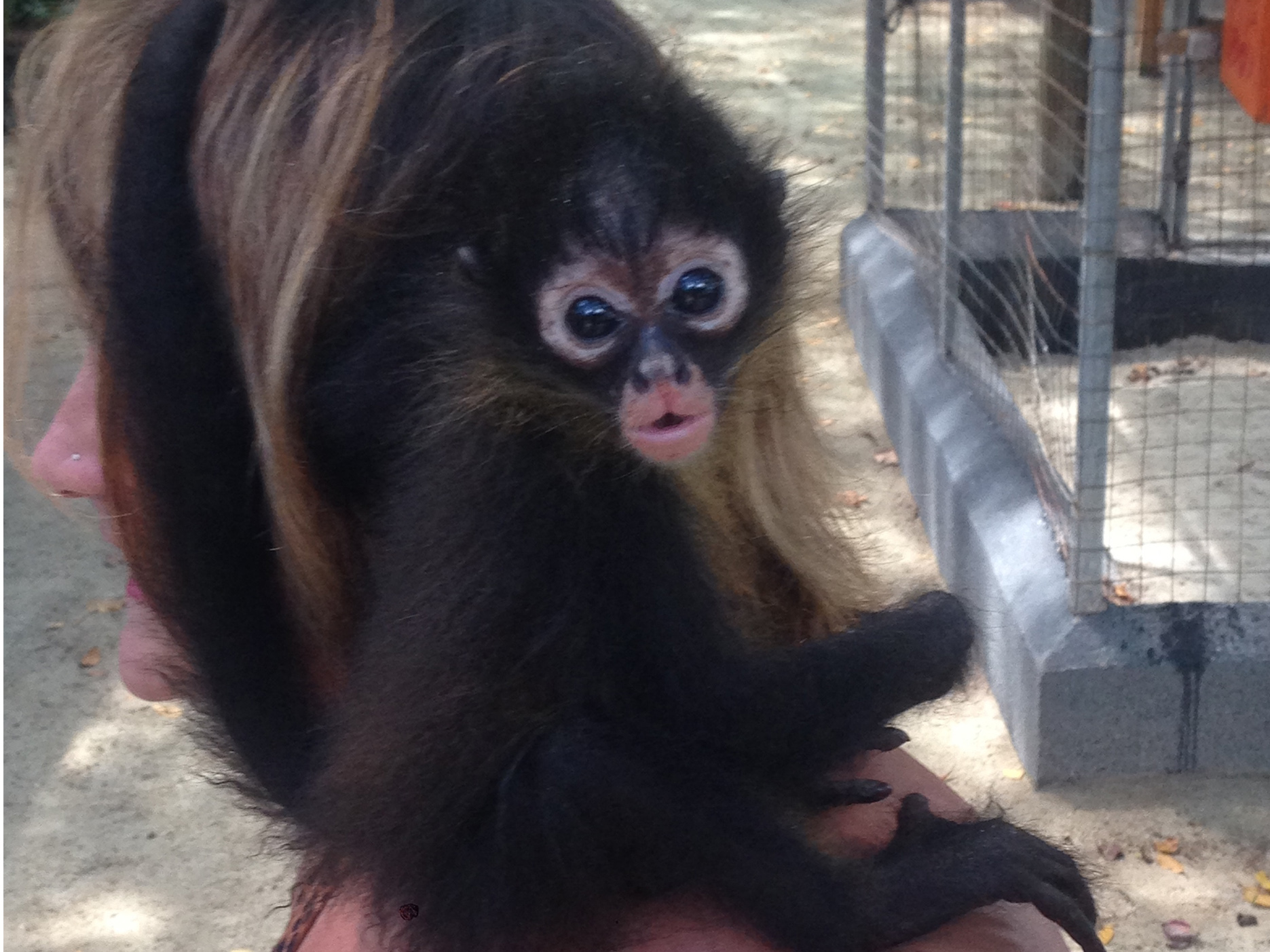 **I have to make a note that when we first arrived I was unhappy with seeing the cages for some of the animals (there were way too many parrots in the large cage). The more I spoke with the care taker and learned the history of each animal and how they came to be at Little French Key, I felt like they were trying to save as many animals as they could. Don’t get me wrong I know they’re a business and exotic animals are a good way to pull in tourists; but underneath it all they help animals. In saying that, I think it’s important that the Little French Key focus more on educating tourists about the animals than appealing to the tourists’ desire to touch and hold them like puppies. It would be a good idea for Little French Key to establish “petting” or “holding” hours, especially during the high season. We came during the low season and were lucky to swim with Simba, but I can’t imagine that’s good for his well being on a daily basis. I loved my experience at the Little French Key;  I hope they continue to save animals and put the animals’ needs before any tourists’. 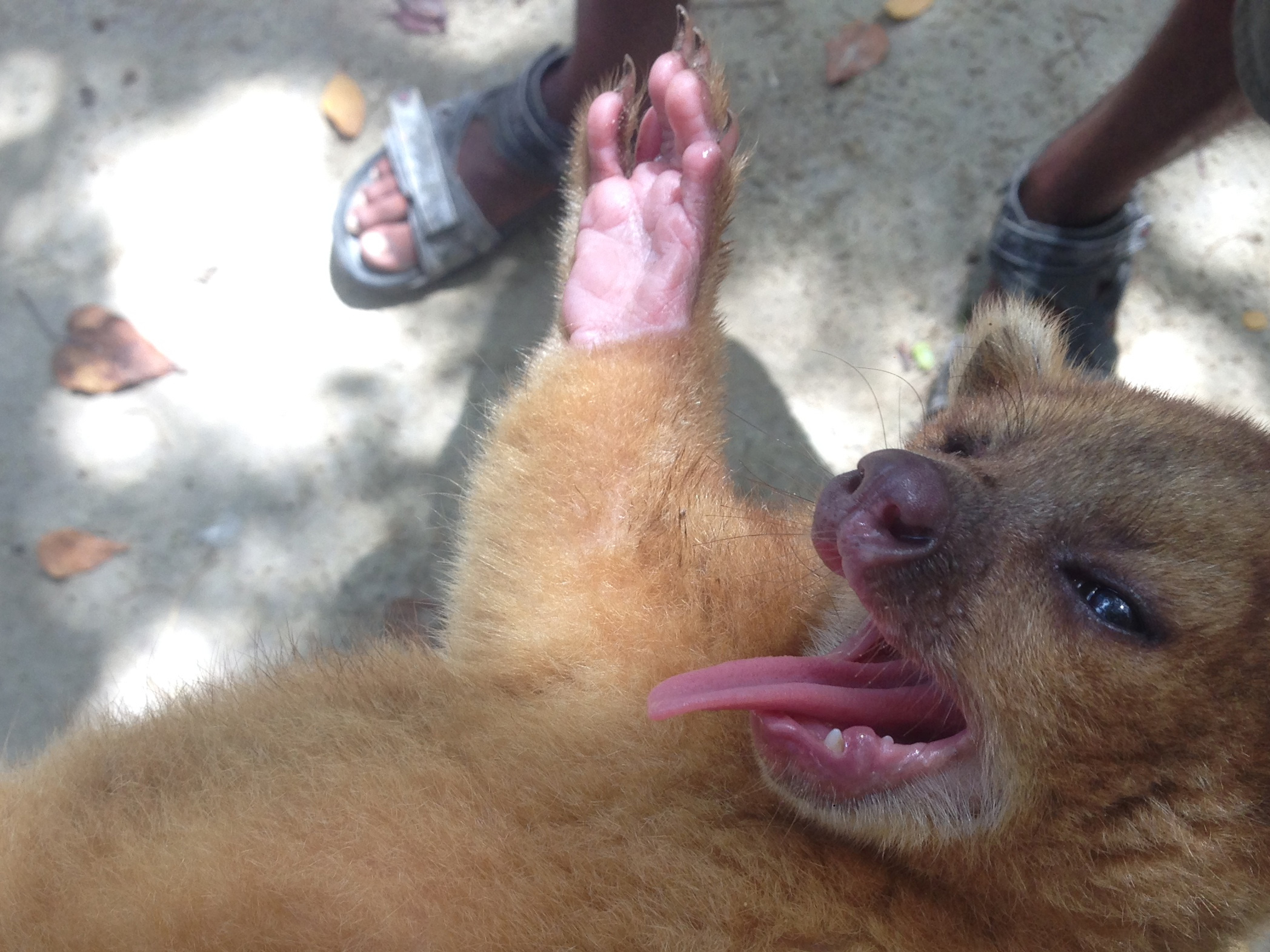